Intra Trans now on display at Schuler Incorporated in Canton, Michigan / Larger parts on the same press thanks to movable carriages

Canton, 01.06.2017 – A live demonstration recently wowed several visitors at Schuler Incorporated in Canton, Michigan: They had witnessed the outstanding performance of the Intra Trans, Schuler’s state-of-the-art automation solution for single presses. For those who have missed the event at the beginning of May: The transfer will on display in the SIC lobby until the end of December.

The transfer rails of the Intra Trans do not work through the press window; they are mounted between the press uprights. Parts are moved in the transport direction by movable carriages. These carriages sit on the transfer rails where servo drives are integrated into the rail. Each carriage of the Intra Trans can be moved individually enabling the central joining of parts or even different distances between stations. By using this compact transfer system, the same transfer press can produce larger parts.

Thus, the Intra Trans is ideal for retrofitting which reduces the per-unit costs of existing progressive die presses. “The installation of a new transfer is an effective and cost-efficient way to modernize existing lines, doing away with often expensive and time-consuming maintenance for older mechanical transfers”, explains Nicholson, CEO of Schuler North America. “Reliability, precision and throughput capacity are significantly improved.”

Active Vibration Dampening guarantees reliable part transfer
The Schuler Intra Trans can be equipped with all part weights and stroke rates, from “L” (Light) to “S” (Speed). The available capacities are designed for use on presses with bed sizes of up to 8,100 × 3,100 mm (319 × 122 in). The applications range from smaller parts such as seat rails and axle brackets up to doors and hoods. Schuler’s Active Vibration Dampening (AVD) system guarantees reliable part transfer for all three transfer solutions – even at high speeds and under full load.

All models include transfer drive housings which can be mounted inside the press, between the press uprights, or externally on the press uprights. In addition, the drive housings can be installed above the feed level (suspended) or below the feed level/passline (floor mounted). This ensures a high degree of flexibility in design configurations in the planning stage for new presses and in retrofit applications for existing presses. 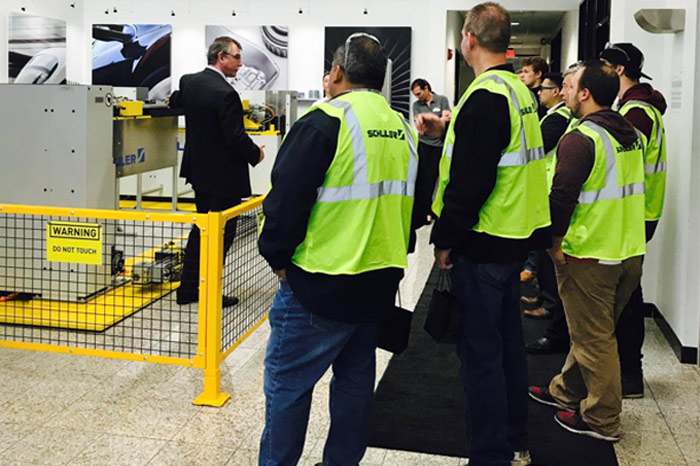 Visitors at Schuler Incorporated recently witnessed the outstanding performance of the Intra Trans. 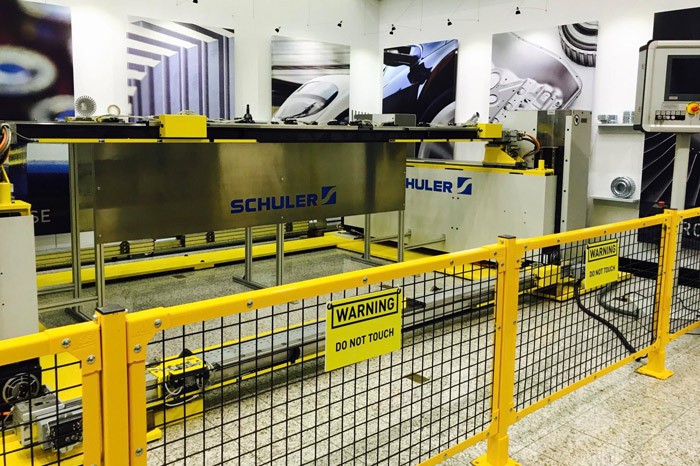 With Schuler’s new automation solution for single presses, parts are moved in the transport direction by movable carriages.

About the Schuler Group – www.schulergroup.com
Schuler is the world market leader in metal forming technology. The company supplies presses, automation solutions, dies, process know-how, and services for the entire metalworking industry and lightweight automotive design. Customers include automobile manufacturers and suppliers as well as companies from the forging, household appliances, packaging, energy, and electronics industries. Schuler is the market leader in minting presses and supplies systems solutions for the aerospace, railway and large pipe industries. In 2016, Schuler achieved a turnover of 1,174.2 million Euros. Following the acquisition of die manufacturing company AWEBA and with a majority holding in Chinese press manufacturing company Yadon, Schuler employs around 6,600 members of staff in 40 countries. The Austrian ANDRITZ Group holds a majority share in Schuler.